Word on the Street: Zoe Zimmer 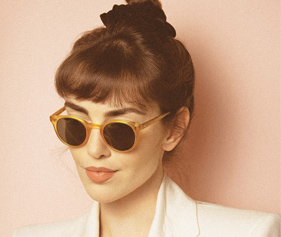 In a new series, ‘Word on the Street‘, we are thrilled to be share an insider’s view on the King’s Road. Musicians and models, politician’s and hall-of-famers from all walks of life have trod this road and we hope that the each individual’s insight will surprise, inspire and delight so that you too, can become part of the King’s Road story.

In the first edition, Zoe Zimmer – a talented model and photographer, and daughter of composer, Hans Zimmer – shares her memories of a childhood spent on the King’s Road and what it means to her today.

“A few years ago, Mary quant was honoured with a Blue Plaque at 138a King’s Road. Rightly so, as her shop that once stood there, Bazaar, was a cultural game-changer in the early sixties. I however, will always remember 138a King’s Road as being the Cornish pasty shop, where as a teenager I’d go for lock-ins in the basement to watch my friends play in bands on a Friday night.

The King’s Road has been part of my life right from the start. Long before my time, my parents had a very eighties wedding at the Chelsea Town Hall, both dressed in very eighties black suits. As a child, there were Sunday lunches at La Famiglia or The Big Easy, followed by staring longingly at lava lamps in Wilde Ones (me), and shoes in Manolo Blahnik’s original Church Street store (my mother).

When I was a teenager, my friends and I spent hours deliberating over which colour mini kilts to buy in AdHoc. Sadly, this was less of nod to AdHoc’s seventies punk roots back when it was BOY London, a shop so cool that Billy Idol himself used to work behind the till, and more of a nod to Dirrty era Christina Aguilera.

On many nights during my misspent youth, you could find me getting ID’d up and down the King’s Road while doing the rounds between The Cadogan Arms, Azteca and Po Na Na, before ultimately ending up drinking Crack Daddies at Crazy Larry’s, and then running in heels to catch the night bus home well past my curfew.

I am aware that the King’s Road of my occasionally questionable teenage years in the mid-noughties, was not the vibrant King’s Road of Mary Quant’s Swinging Sixties. Nor was it the King’s Road of Vivienne Westwood’s punk rock seventies. It’s not even the King’ Road of the 1980’s, when my parents, a model and a musician, hung out in Pucci Pizza with every other model and musician around at the time. But what my King’s Road had in common with all the other iterations that came before it, is that it was so much fun. Like the Mods and Punks before us, it meant something to us to be young and having a good time in Chelsea.

Chelsea has always been a place that attracts the young, the creative, and the hedonistic, and with them comes an inevitable change with the times. While Vivienne Westwood’s backwards clock and other vestiges of Chelsea bohemia are still holding their ground, they now co-exist with new Curzon cinemas, independent designers like Rixo, and exciting exhibitions at The Saatchi.

Walking down the King’s Road today, you might be hard-pressed to believe that there was once a store unabashedly named SEX, or that McDonalds used to be the Chelsea Drugstore (immortalised in The Rolling Stones “You Can’t Always Get What You Want”, and Kubrick’s “A Clockwork Orange”) which had a service called “The Flying Squad”, where girls in purple jumpsuits made deliveries on motorbikes (Deliveroo, take note). And while on the outside, the King’s Road may look tamer than it once did, it’s important to remember that there was a time when this part of The Royal Borough was a major player in all things counter-culture, from the creation of the miniskirt to feminism and LGBTQ activism. It would seem that rebellion is just in the street’s DNA, with layers upon layers of history embedded there by different generations, so it’s a fair bet that in the future it will be the stage for some as-yet-unknown cultural shake-up once again.

While I may no longer be in the market for a mini kilt (though I’m thrilled to see that AdHoc still sells them), my deep love for the King’s Road and its Chelsea neighbours holds strong. I still look forward to seeing what new mural has been painted on the front of Chelsea Art’s Club, what’s playing at The Royal Court Theatre, or sending late nights in the basements of The 606 and The Troubadour. Just like I did as a teenager, except without the curfew.”

To stay in the know all things King’s Road, check back soon for the latest Word on the Street. Make sure to follow us on Instagram for a real-time update of today’s rule-breakers and game-changers.

Our shops have reopened their doors and many of our restaurants’ terraces are open for alfresco dining in the spring sunshine. We want to reassure you that your safety remains paramount, measures are in place to ensure a safe and enjoyable visit.